Professor Ashwin Desai
Professor of Sociology at the University of Johannesburg

Ashwin Desai is Professor of Sociology at the University of Johannesburg. Among his books on sport are Blacks in Whites: A Century of Cricket Struggles in KwaZulu-Natal (co-authored); Race to Transform: Sport in post-apartheid South Africa (edited); Reverse Sweep: A Story of Cricket since apartheid; Wentworth: The Beautiful Game and the Making of Place. He is currently working on photographs of Black rugby in Grahamstown that stretch back to the 1880s. Géraldine Robert
Géraldine was born in Port Gentil, Gabon where she was first introduced to volleyball first. She was introduced to basketball later by her younger brother. At 18 she left Gabon for France in order to continue her studies and eventually to use her sporting qualities. Once in Besançon, France, she tried first to join a volleyball club, but the training schedules clashed with her studies. She then turns to basketball and joined the local club, Besancon then playing in NF2 (3rd division). At the end of the season, when Besançon was relegated to the lower division, she then decided to go to London. After London, she played in different leagues and clubs across Europe.

Between France, England, Italy, and Poland, Géraldine was selected as the most valuable player (MVP) in 3 different national leagues. Géraldine Robert is one of the most successful African female basketball players and athletes of her generation and the best basketball player from Gabon. In Africa, the hype of her career was leading the Gabon women, national team, to its peak at the 2015 Women Afrobasket tournament where they reached the ¼ final for the first time.

After playing her last season in the French league in the 2018-2019 season with the Carolo Basket Flames, Géraldine retired from professional basketball.

She founded Yemaly to support basketball development in Gabon. Yemaly has been organizing camps and youth basketball programs for more than 10 years. Géraldine is also the national coordinator for the school and university championship in Gabon and a member of the French President, Emmanuel Macron, Presidential Council for Africa. My working life started in the early 1980’s First as an article clerk and then as an advocate at the Cape Town Bar. This was a time of turmoil, protests, bombing, burning and detentions without trial. With the possible exception of bombing, my practice reflected this. With only two other black colleagues at the bar at the time, working life was a collage of political trials across the country. Who doesn’t remember their first case? Mine was to represent 400 women who were arrested in Cross-Roads for breaching the Influx Control Laws by joining their husbands in the Western Cape. This was in the old Commissioner’s Court (a court for blacks). We pleaded not guilty 400 times to compel full hearings and clogged the court roll for the next year! All cases then had to be withdrawn by the State.

I then ventured forth to the United States to complete a Masters degree at Georgetown University. The land of the Free! What an awakening! Free to say whatever you want to, free to go wherever the road takes you, and free to watch a whole sector of American society being criminalised by a war on drugs. And many interesting stories. The black Supreme Court nominee and the pubic hair on the Coke can…the incoming President Clinton who as governor, had condemned a black prisoner to death after the prisoner had undergone a lobotomy whilst on death row…

I joined a law firm in Washington DC and practiced in the International Trade Department. I returned to South Africa in 1994, having had enough of freedom. I have been at this university ever since. Abstract 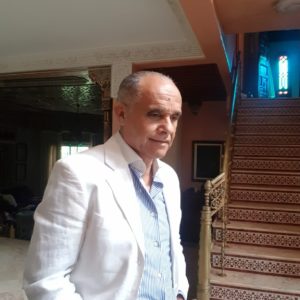 Aziz Daouda is the current technical director of the Confederation of African Athletics (CAA). Daouda was at the helm of the Moroccan Federation of Athletics during a period when Morocco was regarded as a leader in the world of athletics and indulged the world with champions such as Said Aouita, Hicham El Guerrouj, Khalid Sekkah, Salah Hissou, among many others. He also served as general coordinator of the World Championships in cross country in 1998 in Marrakech and CEO of Youth Championships in Athletics world organized in 2005 in the red city.