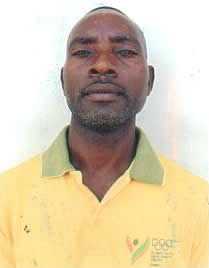 Mayamba Sitali
The University of Zambia

Mayamba is a holder of a Masters’ of Science degree of the University of Peloponnese in ‘Olympic Studies, Olympic Education, Organisation and Management of Olympic Events’. After his secondary education, he worked as an untrained teacher. Mayamba trained as a teacher and was awarded as the most outstanding student in Education, writing and drama. He has a Bachelor in Education with Physical Education & Sport and English language and received a commendation on excellent academic performance in the School of Education of the University of Zambia (UNZA) and was employed by UNZA as a tutor in Physical Education and Sport. In 2010, he became M&E officer for the Olympic Youths Development Centre (OYDC) before assuming the position of Programmes manager in 2012. He then worked as administration and facility manager for three (3) years until January 2017 when he re-assumed the Programmes manager’s position till August 2017. From 2007, he has taught physical education and sport pedagogy. Mayamba was assistant project coordinator for UNZA and Loughborough College of the UK in the Diploma in Sports Studies courses at UNZA. Mayamba trained young leaders under the British Council project of “Dreams and Teams”. He was Team Zambia General Manager for December 2016 Region 5 Games. He contributed to the National Sports Policy and Policy Framework Implementation plan for Ministry of Sport, the strategic plan for the National Olympic Committee of Zambia and he is a National Administration Course Director, member of the technical working group on the “Quality Physical Education” project.

‘Out of Africa: Olympic Education as the Foundation for Community Sport – The Values Perspective’

While Africa may be viewed differently by different commentators, there is something that the world can learn out of Africa. The African continent is rich not only in natural resources but also in its diverse traditions and cultures upon which Sport has benefited. Africa&#039;s cultural activity forms the fabric and epic centre of society values that shaped people’s behaviours. Africans have for a long time lived as communities of different sizes and shared day to day experiences through their many social structures, systems and activities that have kept the African communities together with their values education at the core of their education system. Other scholars refer to this as ‘Ubuntu’ cultural discourse which is somehow a life value that looks at appreciating and respecting other people in general.
It is quite true that, African values have been taught through; games/play, idioms, dance, songs, storytelling and apprenticeship. Arguably, one can prove a point here that, the current practice of parents entrusting their children under the care of coaches is an old and traditional concept of apprenticeship where young people where attached to significant others to be trained in various physical and people skills (morality). So, African education has actually empowered the world.
Olympic Values have been part of Africa and are a foundation of community sport. In this paper, one wishes to argue that Africa like elsewhere in the world hosts its education system on social and cultural practices that underpin the existing social and other behaviours. Physical Education and Sport has been used to communicate various behavioural and social change messages (Life Skills through Values Education) to improve people’s lives socially, academically, economically and politically. Physical Education and Sport using values education has great potential to change the world as the Zambian cases would prove a point in this paper.